Focus on why I am here

Psalm 118;24 This is the day the Lord has made let us rejoice and be glad in it.  I am attempting to live this scripture on a daily basis.  My time has come to the half way point and it definitely has its days.  Some people think that Costa Rica equals sitting on a beach under an umbrella drinking pina coladas all day, kinda exactly the opposite for me this is defiantly not a beach trip.  I will admit that my frustration at times gets to a point where I just want to throw it all down, pack my bags and go back to the life that I had before answering the call that God has put on my life.  Then I think back to a conversation that I had just after being here for a few weeks. The conversation was with Elgien a Nicaraguan that pastors the church La Amastad that I attend here in Costa Rica. Elgien was an architect when God called him to ministry, then laid it on his heart to be a missionary to Costa Rica where he has lived for the past 24 years. As we sat and struggled threw the language barrier which happened and still happens at times. I was able to really track what he was saying to me which in its self was a huge boast in confidence in its self, but what he began to speak about was when the Spanish conquistadors came to Latin America, and when they landed the leader knew if they where to run into trouble or hard times that all the men would just turn and run back to the ships. So his way to make sure the mission went forward was that after they landed the leader burnt the ships that they came on only leaving them the path in front of them to go with. He explained to me that his boat that had to be set ablaze was the idea of returning to his promising career and even his home country of Nicaragua, that if he was gonna fulfill what it was that God was telling him to do that he must take the temptations out of his thought pattern. Then the obvious happened he turned to me and asked "Coy what is it in your past that you need to set fire to? What is the boat that is docked waiting for you?" What an eye opening question and honestly a am I really in this thing or not. I was very honest with him and my self, I told him I do miss being home in my comforts having a car to drive whenever I want, having my own home that I don't share with five other people, I miss having the money just to do what I want with and if need be having the ability to go and make more, I miss work the filling of success and fulfilment that it brought me finishing a house and looking at it going man looks good its done moving on to the next one, having my boss say man thanks for what you do for my company and thank you for being part of it, I miss getting away on the side of a mountain with the Lord and just relaxing hiking the trails back home, I miss bonfires at my house with my buddies, I miss mowing my lawn for three hours. I know that I could go home and have a very comfortable life probably not wanting for anything or going without, I could be the top guy at a company or even start my own company. The thing is the resounding thought in my mind and heart is what is the Lord saying to me which is what Elgien asked me as well, and above that what does the word say about it. With that being said I have set ablaze the thoughts and ideas of going back and I have been pushing forward with this life and my studies of the language. Like I preached in chapel last week to often I think we miss the part in the Bible where it says that there will be lose and there will be suffering. Not that always but not limited to physical lose or suffering, but can even mean something as simple as not being able to just hang out with your best friends around a bonfire. I suffer the things and I believe Gods word says we should suffer these things for the sake of the message, because what else will set us apart from the world. More than missing comforts of home for those that know me personally taking me off the job site and putting me in a classroom is defiantly suffering haha, and I am very thankful that its only a year and that God has given me some natural ability to to obtain the language. 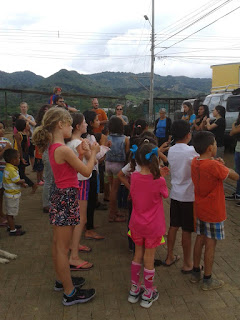 With that being said I would like to give and update on some things that have been going on. I was given the opportunity to preach in our chapel time again last week. Out of the two times that I have been able to share I really feel that the lord has given me a word for my fellow students and that someone if only one is taking something from it. Also I am growing that is not the easiest crowd to speak in front of I mean these are all missionaries and some of them are here after pastoring a church or leading a successful ministry, meaning all have a set theology of what they believe and why. So its been more on encouraging to continue through the struggle and keep your eye on the prize, which for me is a weaker area encouraging, but that is usually where God shows up in our weakness to make Himself known and to grow us. I am hopeful that I will be one of the chaplains next trimester which I think will be good for me as I start to make my transition from student back into leading after I leave here. Also a few weeks ago I was invited by some good friends I have made here Jay and Courtney Nelson to go with there church and love on some kiddos in a ghetto housing project. It reminded me of last year in Honduras I am not a huge kids ministry guy, but I love playing games with kids and I have been playing a good bit of soccer here so it was fun to practice my skills on the kids only to find that I am still getting schooled by 10 year old boys haha oh well. It was a great day and really helps keep that fire kindled. 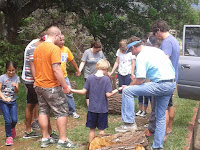 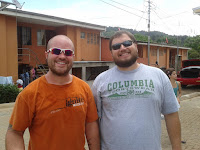 This area I called Los Guidos and is a typical ghetto where the government relocated a group of people that used to live in shanties down in the valley near this area. The people where mostly Nicaraguans that fled their country during the civil war 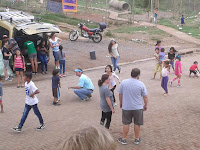 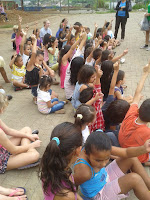 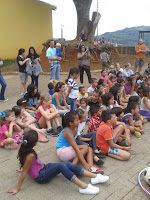 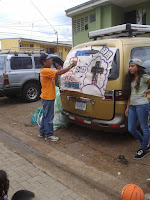 or people coming to work the coffee and sugar cane crop, much like in the states when the migrant workers come and work the crops cause we say the work is to hard and the pay is to little, but to them its better than where they where coming from. Although just like in the states when we hand people free housing and other assistance typically it does not help it just causes more problems which is what we found here in this place. A lot of thugs and drug dealers and there was a large number of mix children which is a common sign of prostitution here. There was also visual signs of violence in the areal for example right beside where we where playing with the kids there was a car on blocks stripped and burnt to the ground and tags all over the street and walls of the apartments. There was light though this church goes there often and a lot of the small children could recite verses from memory, like in all things the absence of adults will mean that it will be a long slow road to change, but it is not a reason to give up it should be what pushes us forward.

All support is appreciated as this life's work cannot be done with out God and his support through His people. Prayer support and financial support are always in need. If you are able to support financially please visit http://www.ignitemissions.org/#!contact/c175r this will take you directly to the support link. Simply follow the provided directions and add Coy Houston Davis in the memo line. Thank you for your support emotionally, spiritually, prayerfully, and financially.
Posted by Unknown at 1:16 PM